Yesterday history was made in the hockey world and I was there to witness it with the Boyfriend! I’ve been a huge Los Angeles Kings fans for the better part of the last 15 years. No, I wasn’t raised with hockey like some people but when I dated a hockey player for a hot minute I suddenly was ravenous with desire for the sport. And my passion for hockey has grown and grown even though my relationships with the Hockey Player ended quickly and without damages to either of us and now, well now I go to games whenever I can get my grubby little hands on tickets.

Since the Hockey Player I have dated only one other guy who liked hockey. So, now that the Boyfriend has taken up a liking for hockey over the last year and half or so, I am amped that I have someone to go to games with on the regular. Last season I went to twenty games including one play-off game. This season much lower considering the change in commute and also resources with job changing and stuff. But, I have been to two play-off games which totes makes up for missing the season games. Right? Of course it does.

Yesterday, we watched the Los Angeles Kings sweep the somebody’s Blues! On a whim we got tickets and jammed down to the Staples Center with nerves a plenty. Not that losing this game would have been a play-off ender but a sweep was what we needed. The team. The fans. All of us needed this sweep to prove that we are not only a team with potential but we are not going anywhere without a fight! 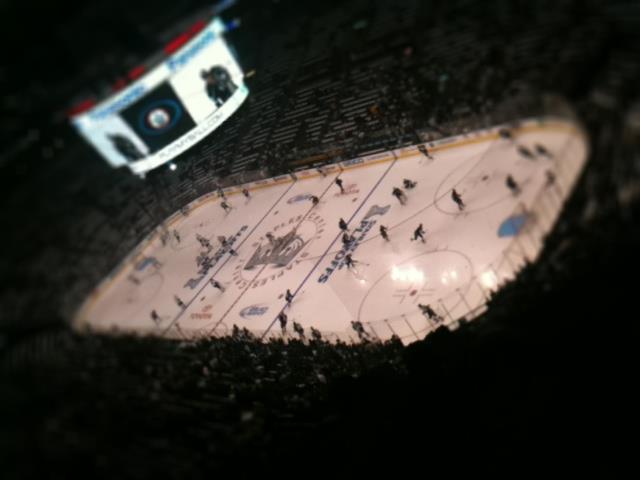 Hockey is an amazing sport. It’s replaced sports I sort of have limited interest in with the passing of relatives and a growing disgust for how many sports have just become business opportunities for individuals. Hockey is a sport of everyone. In our row last night there were folks ranging from trolls with big mouths to kind drunks sharing their peanuts and in front of us a grandma yelling ‘Kick their asses Kopitar!!!’. If you walk through the halls of the Staples Center after a game there are what you might stereotypically think of as ‘hockey fans’. You know the gruff looking men with their jerseys and then the girls who could bench press a small cow, but if you lined us all up you’d have a huge cross-section of America. People who like a sport because they like the sports and aren’t looking to out-bling the next guy or girl or whatever.

I love hockey. I love LA Kings hockey. SWEEP BABY!!! And now on to the next!

Feel it and write it.

Blood from a Rock?

the Mama & the Body Art