Last night I put myself to bed with a tried a true method. Wine and Sex and the City. I posted about my meh-ness and well that is-what-it-is. While I tossed around the idea of busting out the Voodoo, I resisted. After all, I am a big girl and adding to the fact that said non-suitor has never met me I can’t hold against him that he isn’t playing with the full knowledge of my awesomeness. And who knows once he meets me he may not fully be able to handle said awesomeness, right? I mean not that we’ve made plans to meet…so yeah.

I digress and we’re back. 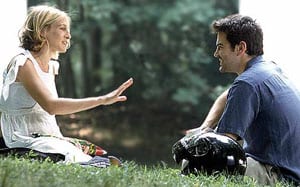 What is Zsa Zsa Zsu? I’m still trying to figure it all out…but as I understand it from my studies. It’s that feeling of getting caught up the butterflies and giggles and heart and puppy dog rainbows when you first meet someone of whom peaks your interest for the mating. You know when you can’t stop thinking about someone and all you want to do is just breath their smell and hold their hand and ugh, I could go on forever. You frackin’ get it.

In one of her post-Mr. Big for the hundred-millionth time, Carrie decides she’s going to look for someone who genuinely curls her toes, isn’t married and doesn’t have giant ass commitment issues. Not asking too much right? Oh but it is! Every person on this planet who has had some kind of relationship has baggage. But, I totes relate to her desire to have her toes curled and lose herself in something that just feels good. Of course, it is much easier to do with someone who is available for the Zsa Zsa Zsu. More often than not, people don’t realize that they aren’t available. Floating through the world hoping that our baggage won’t hinder the possible toe curling. Like Carrie who meets Jack Burger, a recently split from long-term girlfriend guy who she is indeed interested in dating in spite of his obvious lack of availability to date at all. He is broken by the break and while he is obviously attracted to my favorite Sex Writer, he is no where near ready for the ultimate relationship that my dear Carrie is looking to achieve. Why do we do this? Knowing what we’re looking for in a relationship, there are many times in life when we overlook the obvious Red Flags to give someone a chance because we are so desperate to find the Zsa Zsa Zsu. I’ve seen this show before. On the television and in real life. I’ve been the Carrie. In fact, jokingly Mr. S used to call me Carrie and then in a fit of anger he made it seem like a bad thing. I heart my outlook on life today.

Is it in fact a bad thing to be the girl looking for the Zsa Zsa Zsu? Me thinks not. I love my ever-present faith that at some point in this crazy life love is going to walk through the door. I do however, love my skepticism and cynical realistic brain that often shows me that someone has the baggage that will eventually squish the Zsa Zsa Zsu and as Miranda so eloquently put it create nothing but Zsa Zsa Eww. Love is trial and error and while lately it appears I am making a shit-ton more errors than anything it is something I can learn from and hopefully use in the future? I’m not desperate to fall in love. When desperation takes over it most likely ends in what is tantamount to falling into a mud puddle while wearing your best white summer dress with your favorite shoes on that just happen to be some kind of irreplaceable material. Worst feeling ever. You saw it coming, you knew it was there but you thought you could easily jump over it with ease and grace. Fail. What I desperately want to figure out is this whole timing thing that lately appears to be wedging itself between me and my happiness hunting. I seem to over think the obvious.

When I like someone I tend to take my time deciding if my gut is right or if my heart and brain have cooked up some kind of scheme while plotting against me. For obvious reasons, I just don’t take this kind of stuff lightly. However, I seem to either hit the mark too early or too late. What gives with that? I suppose I will have to take it back to the lab and see what I come up with, right?

I’m growing weary with the effort and always getting the Zsa Zsa Eww. Where the frack is my Zsa Zsa Zsu???