Home Mom Stuff Co-Parenting The Dad Battle: Daddy’s versus Father’s…who are you? 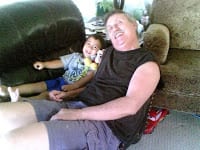 As a little girl I always felt like the only person who mattered in the world was me…okay until my sister came along…but, for my parents there was nothing more important than their girls. My Dad was one of those parents who brought home special treats for dessert and cool trinkets from his travels. We were Daddy’s Girls and I always thought I was so lucky to have such a wicked cool Dad. He’s listen to music with us and dance around the room like a fool to whatever was on the record player, because he loved us and would do anything to see his girls smile. With all his own dysfunctional history of being raised by former military and a Midwestern school teacher my Dad never batted an eye at affection.

This kind of love is what I measure the men in my life against. The kind of Man I want to raise my children. I should’ve known from the first conversation (argument I should say) the Bio and I had about raising kids that this was not the kind of Man I wanted to have a child with and yet I did. Love or at least the desperation of wanting to make love last makes you see things in a distorted picturesque view.

In my last post I mentioned the idea of being a ‘Daddy’ versus just being a ‘Father’. This is a huge topic of meaning for me as the mother of a little boy and also as the little girl of an amazing ‘Daddy’.

When I was about 9 years old my half-sister magically appeared out of nowhere and came to live with us when her Mother died tragically. The short version, her parents had divorced before my Dad even knew she existed…and it was my fault. Our five year age difference made no sense to her and the fact that I was so in love with this Big Sis of mine made no sense to her already warped sensibility. Our Dad loved us all but it was not to be. Our new family fell apart and soon after my half sister went AWOL and I have no clue where she is…to this day I wish she and I could mend fences and be sisters. At least for our kids.

When I was 15, I caught my Dad crying…my Dad has one of those you don’t cry in front of people attitudes and I’ve seen him cry all of four or five times now in my life. It was my nieces birthday and mine was coming up…I’d be 16 and she would’ve been 5. At that moment I didn’t tell him I saw him crying, instead I told my Mom how guilty I felt for ruining my Dad’s life. If it wasn’t for me maybe she would still have her family. That’s when my Mom told me the whole story…the divorce, how my Mom and Dad met WAY after and how on the day I came home from the hospital post-birth my Dad thanked my Mom for giving him the chance to be a real ‘Daddy’. I cry every time I think about how my Dad was never given a chance to really love his first child or his first grandchild for that matter. He left for his own reasons, but his wife and the mother of his first child would not let him participate in her life and that kills me to think of the pain it caused both of them.

On my 22nd Birthday, my Dad almost died of bleeding ulcers and I told him I was sorry for everything…and he told me he was not.

Today I struggle with that desire for my son’s Bio to be a Daddy just like mine…but I know he’s not. He’s madly in love with our son but he’s not that kind of Man. Many of our battles are because he’s just not that Man. He’s strict and careful and has expectations that are often ridiculous of a 3-year old. But they deserve to know each other and I will always want that for them. Maybe someday he’ll be comfortable in his skin enough to just be a Daddy. And yet I thank G*d that my Dad is here and present for my son daily because just like he was that Man who was my Daddy, he is that kind of Grandpa. He is the kind of Grandpa that brings so much joy to my little boy that I can’t imagine what my life would be like without him in our lives.

Every kiddo deserves more than just a father…they deserve a Daddy too.