Home Adulting Rinsing My Mouth Out.

Remember high school? I certainly do. I remember watching groups of people ebb and flow in and out of each other’s good graces. I remember not wanting to engage in it and walking away. I remember that feeling of satisfaction when I finished enough of my credits that by Senior year I could simply just TA or take nonsense classes and be done by lunch time. It was a relief to be away from that kind of environment where you’re squashed into pretending to like most everyone.

I think that’s why I loved college. There was no pretending to be friendly with people because you had to spend four years with the same people. I chose my own group. The Boys and I were solid. Drama-free. No nonsense. And then I came to the SCV to raise a Monkey, and I was faced with the same cliquish nonsense. Either you’re in a Hipster Group or a Hippie Group or a Socialite ‘Burbs Group or you’re like me sitting on the outside dazed and confused in awe of the ridiculousness that these people truly are. Honestly, I was totally fine with maintaining anonymity with all of these groups. I like my friends. They rock. They are honest forthright people who don’t lie or make things up about others to suit their own purposes. They are good folks. I heart them. But for the Boyfriend I would try. I would embrace his friends with the same love he would eventually embrace mine. And there it was high school all over again. But these people made him happy. So, I grinned and bared it with class and dignity an in the process found only a few who really didn’t sound off any alarms. And as it would turn out they proved me right.

Always expecting the Boyfriend to be something he was fervently growing out of being, and not accepting him for who he was growing up to be. Learning about himself and exploring life. In the long run those people have turned tail and snubbed their noses at him, and well then me. And in the process, I have been bad-mouthed and dragged into a web of ridiculousness that I just can’t believe anyone would want to be apart of in any way. Three weeks ago I blocked every one from the group with the exception of two people. Done and done. But now all are blocked. Those who know me, know I have no problem with severing ties to people with bad juju. So that’s what I did. I blocked. I unfollowed. BAM. Nope not the case. As y’all saw from my last post, that was just not good enough for people who had allegedly written off me and the Boyfriend. The continued to follow my Twitter feed and call me unsavory names. Well, I ignored and then someone started this account… 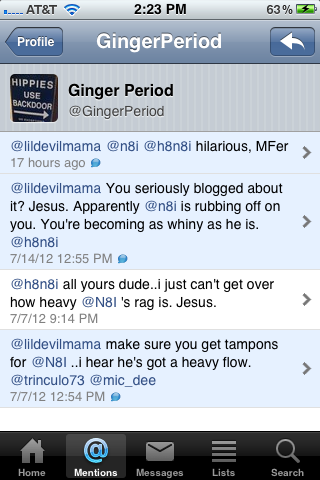 Simply to be obnoxious. To harass. To take jabs at me and the Boyfriend for no apparent reason. But, it was certainly nice of them to read my blog. Then, I hear about another account. An account mocking this group of individuals who have excommunicated the Boyfriend and as a result me as well, from their tiny little world. I wake up this morning to murmurs on Twitter and over the interwebs full of accusations that the Boyfriend and I  were indeed the culprits. Wow. Just wow. Irony? Oh hell to the yes. An account magically appears with a nickname that the Boyfriend gave to their trivia group. Like magic. Out of nowhere. Poof! Never mind that I had just blocked the above pictured Twitter or that I had already blocked the entire group on my own. Oh irony, indeed. Why would I waste my time putting up a barrier between my family and the drama, only to create more? Well, gosh darn it…I wouldn’t. Neither of us have the energy to bother. We’re busy with raising a family and building a home.

The whole thing is just ridiculous. It’s childish and silly.

When people tick me off or insult me or cross the line, I confront them if I know them and if it bears necessity otherwise I let it be. It’s a horrible thing to drag someone’s name through the mud. It’s a terrible thing to defile someone’s reputation. It’s an awful thing to act without thought. If I was the kind of person who treated people this way, I could count on my fingers how many times in the last two months I’ve been treated like dirt by folks in this regime and I could have responded by throwing stones at their tiny glass houses they so carefully have built. But, I choose to say over here. At the grown up table with the people I love and those who know me and choose to be here with me for who I am, and avoid those who would try to make me fit into their pretentious little bubbles.

After today, I hope the blocking and the avoiding pays off and that there are no further quakes in drama-land.

My next blog may be a cathartic post that Mr. C is encouraging me to write…or a funny one about the genius who keeps texting me even though we haven’t talked in a over a year and I haven’t responded yet…we’ll see.

Deanna Leigh - March 25, 2014
0
This evening I did something I never thought I'd have to do. I signed the Monkey up for a twice weekly tutor. (insert desperate sigh...

When I grow up…

My Couch. My House.

…just a Girl…or just a Mom?