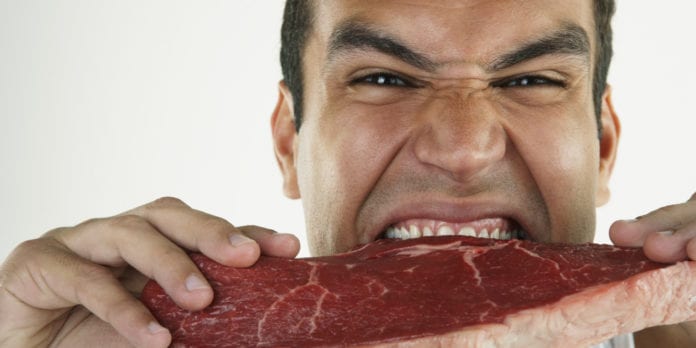 A weekend or so ago, my BFF and I had interesting chatter about what she perceives as requirements for a man to be Manly. I personally, thought it was amusing. She had gone on a date the Friday night prior and the gentlemen she had dinner plans with ordered a salad. This of course in her mind was a sign that he was definitely not a Manly enough man for her. And in her mind, real men don’t order salads for dinner. Shit I was left thinking she thinks they probably don’t eat veggies. Well at least not in public that would ruin their reps as tough men who can pound beers and eat raw meat off the dead animal. We are so different. It baffles the mind…but she is often the Ying to my Yang.

So, it was ever so amusing when I caught a recent Frisky poll on the same subject. DO YOU SEE MEN WHO DON’T EAT MEAT AS LESS MANLY? Seriously, check it out! At the time that I voted the response was heavily in favor of ‘That is Stupid’. But apparently the thought behind this study that was done is that men who eat meat project a more ‘masculine’ image and therefore could possibly be better providers for their family, due to their ability to provide meat. I’m totes paraphrasing, but you get the idea. Right? A Man who eats meat equals better suited mate for procreation.

I eat meat. I was a vegetarian in college. Shit I will try almost anything at least once. Oh, and a boy was involved. His lack of meat eating didn’t make him less Manly in my mind. He was hot. He was sexy. He could fix shit. He was smart. He was able to satisfy my needs all around in the Romper Room. So, no points were deducted due to his mass consumption of Tofu. But in the end he was not the one. Meh.

In my opinion, what a man consumes does not make him more or less Manly. If a man is constantly only eating meat that might even be a Red Flag about his health choices. I mean do I need a long-term relationship with a coronary? No thank you. What is Manly? To each her/his own. Most thought processes steer us toward a man who can fix stuff around the house, change motor oil and throw me up against the wall for a passionate kiss. *sigh* In fact, my BFF has stringent physical requirements on the men she meets and dates. Suitors must be a certain height, weight, build and so forth. It is absolutely ridiculous in my mind at this point in my life. I’m like the United Colors of Bennetton when it comes to dating. I love variety. I love seeing who might fit this crazy girl’s world. There are so many lovely types out there who wants to only eat Vanilla every day when there are 31 Flavors or more? Mama doesn’t get it.

Manly for me is sort of a cluster of attributes that all revolve around a man’s character and how he lives his life and treats those people around him. But for shizzle physical pieces to the puzzle come into play, but it’s not always the biggest piece. Case in point, Nomad is a giant of a man, hands on fixer and artsy photog type…Mr. S was in a whole other spectrum, he was average height, runner’s body and more of your average joe type of feel…Good Guy is a whole other animal when it comes to hotness. He’s like no one I’ve ever wanted to be around. Each man I’ve dated, I think is Manly in their own way. Variety is good. It helps to figure out what works and what doesn’t, in all aspects of life.

Manly, I think is in the eye of the beholder. Every man has their own Manly Fingerprint that makes them unique.

What says y’all? What makes a man truly in your eyes?

Deanna Leigh - March 25, 2014
0
This evening I did something I never thought I'd have to do. I signed the Monkey up for a twice weekly tutor. (insert desperate sigh...

A Rant about the Swifter.